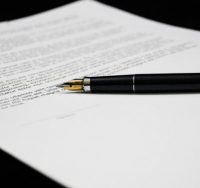 Joint retainers are common in wills practice. Wills and estates lawyers are often asked to prepare mirror or mutual wills for two spouses. While the lawyer is typically assured by the couple that they are in agreement about the proposed estate plan, lawyers should be careful when relying on these assurances, because over the past five years, conflict of interest claims have proven to be the fourth most common type of malpractice claim in wills and estates practice.

A lawyer contemplating accepting a joint retainer should consider three “threshold” questions: is there a conflict of interest in acting for both spouses? Would accepting the retainer be consistent with the Rules of Professional Conduct? And finally, how should future retainers by the same parties (individually) be managed, in light of client confidentiality? Conflicts of interest can arise at various times during the retainer.

Conflicts at the time of drafting
When preparing mirror or mutual wills, the lawyer must be satisfied before accepting the retainer that there is no conflict of interest between the parties. He or she must satisfy himself that the instructions are given freely and without undue influence. If there is any concern about undue influence the lawyer should recommend independent advice be obtained.

To test for conflicts of interest, lawyers must ensure that the clients understand the effect of the proposed will. Do the clients truly intend to restrict the survivor’s right to change his or her will? If the intent is that the wills be mutual, should a domestic contract be drafted to confirm the terms? Should the parties have independent advice?

Conflicts down the road
Conflict of interest can arise when the wills are completed and executed. One spouse decides he or she wishes to change a mirror or mutual will. Should the lawyer make changes without advising the other client? And should the lawyer keep the change request confidential? Finally, would accepting a subsequent retainer be contrary to the Rules of Professional Conduct?

In most cases the lawyer who prepared the challenged will, will be sued or be called to testify at the trial. The best defence for a lawyer is a well-documented file which will include a proper retainer agreement, lawyer’s notes on meetings with the clients and a reporting letter on the will.

The caselaw
In Edell v. Sitzer (40 E.T.R.(2d) 10, 2001, affirmed (2004) 187 O.A.C. 189) and Hall v. McLaughlin Estate (2006 CanLII 23932 (ON SC)), Canadian courts were faced with fact scenarios in which disappointed would-be beneficiaries sought to overturn their fathers’ (new) wills by establishing that their parents had created mutual wills when the mothers were alive, but that the fathers had revoked those wills contrary to the provisions of the allegedly mutual wills.

In both cases, the court held that a finding that wills were mutual wills required “clear and satisfactory evidence” of an agreement on the part of the spouses.

In Edell, the court preferred the evidence of the father and of the lawyer who had prepared the couple’s wills, and who testified that there was no agreement to make mutual wills. The father’s new will was upheld. In Hall, the court found that evidence of the circumstances surrounding preparation of the wills (the Halls were a “blended family” in which each spouse had children from a previous marriage) and reported conversations between the children were sufficient to establish the necessary “clear and satisfactory evidence” that the original wills were mutual wills. The court imposed a trust on the survivor father’s estate in favour of the wife’s children.

The bottom line
Joint retainers in the estate planning field create issues which can give rise to potential conflicts of interest for clients and lawyers. Lawyers are advised to take the time to explain and document the advice given to the clients who seek to retain them jointly for estate planning. Any limitations on the retainer should be explained to the clients and documented in the lawyer’s notes and reporting letter. Where conflicts of interest are indicated the clients should be instructed to obtain independent advice.

Pauline Sheps is a claims counsel specialist at LAWPRO.

This article originally appeared in the November 30, 2012 issue of the Lawyers Weekly.