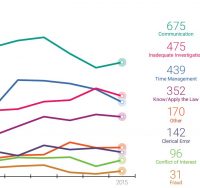 Between 2010 and 2014, annual claims costs were verging on a worrisome $100 million plateau. as claims costs for 2015 come into focus, there are indications that we retreated slightly down the side of that $100 million mountaintop, perhaps as far down as the $81 million mark. Claim numbers have also decreased − a development that has translated to a 2015 claims rate of 99 claims per 1,000 lawyers, down from 103 in 2014, and below 100 for the first time in five years. However, it’s important to keep in mind that these small adjustments are not statistically significant changes.

While it takes many months after a claims year for the numbers to stabilize, this is certainly good news, though what it means in the broader context remains an open question. The best-case scenario would be that 2015 results are the beginning of a retreat from a highwater mark. The worst case: that we are witnessing the calm before a storm triggered by the new January 1, 2017 deadline for the administrative dismissal of long- delayed civil litigation lawsuits.

Regardless of how things turn out, a better-than-budget claims year provides a welcome cushion of stability that will help LawPRO weather future challenges.

Because it takes time for claims to develop and be investigated, by the end of 2015 we were developing a fuller understanding of the causes of loss for claims that were reported in the previous year.

While communication remains the leading cause of claims, inadequate investigation and time management have, over the last decade, switched positions multiple times as the second and third most important causes of loss. as the January 1, 2017 deadline for getting pre-2012 actions onto the trial list approaches, it is reasonable to expect that time management will continue to be a significant driver of claims. For this reason, supporting lawyers in developing strategies to manage litigation file deadlines has been an important goal of our risk management education program in the past few years.

The causes of loss that showed the greatest year-over-year increases in 2014 were inadequate investigation and a failure to know or apply the law. These two causes have something in common: lawyers who make these kinds of mistakes have failed to take the time to learn what they need to learn – whether about the facts, or about the law – to handle a file effectively. Not taking sufficient time with files can be the result of pressure to take on more files than a lawyer can competently handle; but it can also flow from internal factors like procrastination. whatever the root cause, the growth in the number of these claims makes it clear that risk management depends on a willingness to learn, both by communicating effectively with clients, and by taking advantage of opportunities for continuing professional development.

The distribution of claims across the various areas of practice continued, in 2015, to follow established trends. The “spread” between litigation-based and real estate-based claims increased slightly in 2015, while recent shifts in the incidence of corporate law and wills and estates claims moderated. The overall pattern for the year, however, revealed no surprises.

LawPRO monitors claims trends both for underwriting purposes and to assist us in identifying areas of focus for our communications. For example, our observation of the upward trend in litigation claims encouraged us to focus on communicating about forthcoming changes to the administrative dismissal regime, while the stability of the rest of the pattern made 2015 a good year to publish a LAWPRO Magazine issue devoted to stress management and career satisfaction, issues relevant to lawyers from all practice areas.

Our 2015 claims handling report card LawPRO’s professional indemnity coverage has been trusted by Ontario lawyers for over twenty years. The importance of responsive, well-designed malpractice coverage is never better appreciated than in hindsight; that is, after working with us to resolve a claim.

To ensure that we are meeting lawyers’ expectations, we invite lawyers to reply to a satisfaction survey after their claims are closed.

Providing insureds with good value for their insurance money and matching them with courteous, experienced counsel is important; but effective representation is equally fundamental to our insureds’ satisfaction. LawPRO manages claims costs by making strategic decisions about dispute resolution methods. while many claims are resolved through negotiation, mediation or arbitration, we go to trial a few times each year where the circumstances warrant – often to ensure that we set precedents that will support lawyers in the long term.