Defending lawyers in court in 2021 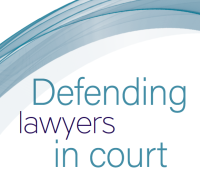 Despite any attempts to resolve claims without litigation, sometimes court is inevitable. Every year, LAWPRO steps in to defend licensees from unwarranted lawsuits and accusations. Here are a few examples of defences successfully advanced by LAWPRO in 2021 on behalf of insureds.

There are various reasons why a client may refrain from pursuing a claim against their lawyer after a potential error has been made. The client may believe there is an alternate avenue for rectifying the situation. Or the client may want to protect the working relationship they have built with the lawyer. Regardless, if the client decides not to pursue the claim, their lawyer is entitled to the same assurances as anyone else once the limitation period expires on the alleged error.

In this case, the Plaintiff was a general contracting company that provided construction services for a condominium project. The Plaintiff wasn’t fully paid for its work, so it retained the Defendant Lawyer to pursue payment. The Lawyer registered a lien for the amounts owing on title to nine condominiums on the project.

Unfortunately, the Lawyer mistakenly assumed that it was not necessary to file a Certificate of Action to perfect the lien and did not do so. The lien therefore expired 90 days later. By the time the lawyer learned of the expiration of the lien the following year, the owners of the construction project had already filed for bankruptcy.

Upon confirming that the lien had expired, the Lawyer informed both the Plaintiff and LAWPRO of the mistake and advised the Plaintiff to obtain outside counsel. However, after consulting with
outside counsel, the Plaintiff came to believe that the amounts owing to them would be reclaimable through the bankruptcy process as an unsecured debtor, and there would therefore be no significant losses tied to the expiry of the lien. The Plaintiff informed the Lawyer that they did not intend to pursue a claim in negligence.

Unfortunately, the Plaintiff was not able to recover most of the amounts owing through the bankruptcy process. As such, almost five years later, the Plaintiff initiated a claim against the Defendant Lawyer for professional negligence.

LAWRO successfully assisted the Defendant Lawyer in arguing that the limitation period on the potential claim against the Lawyer had expired. The Plaintiff was aware of facts giving rise to the claim five years prior and chose not to pursue the action. The fact that the Plaintiff mistakenly believed they would be able to recover the funds through an alternative legal process does not mean the potential claim was not yet “discovered,” as the Plaintiff was only mistaken as to the potential quantum of damages flowing from the claim at that time, not the existence of the claim itself. The negligence claim was therefore dismissed.

Ineffective assistance of counsel claims, as an independent basis for appeal, can often arise against defence counsel after unsuccessful criminal trials, regardless of their possibly tenuous basis.

In one case, the criminal Defendant had been accused of defrauding the clients of his company, which claimed to invest client’s funds in precious metals. The trial judge found that, despite misleading statements to clients suggesting that the company held an inventory of precious metals that clients would be investing in, the company in fact did not purchase or own any metals and clients were merely purchasing a notional “metal position” that only existed on the books.

The criminal Defendant claimed that they had received legal advice in the form of a memorandum that assured the Defendant of the legality of the business plan. This memorandum was
entered in evidence. However, the author of the memorandum was not called by defence counsel to testify.

The criminal Defendant appealed, partially on the basis of ineffective assistance of counsel. The Defendant claimed that the author of the memorandum should have been called to testify.

LAWPRO successfully assisted the Lawyer in showing there was no ineffective counsel or negligence in the conduct of the criminal trial. The language of the memorandum suggested that its author was unaware of the misleading statements to clients. Calling the author to testify on the stand would most likely confirm that the author was also misled as to the business practices of the Defendant, which could undermine the defence strategy. It was reasonable for the Lawyer to not call the author to testify.

It is not entirely uncommon to see negligence claims filed against lawyers who never represented the plaintiff, and in fact represented the opposing side in a negotiation or dispute. Such claims are always unlikely to succeed, as lawyers generally do not have a duty of care toward non-clients. However, these claims must still be defended.

In this case, the Defendants in the underlying claim had entered into an agreement to sell vacant land to the Plaintiffs for approximately $500,000. The Defendants had held the land for 27 years. Importantly, a mortgage on the land had been accruing interest for that entire period, and the Defendants had made no payments on that mortgage.

The Lawyer subsequently withdrew the settlement offer and demanded payment of the total amount owing on the mortgage. The Lawyer then served a notice of sale on the Defendant’s land pursuant to the defaulted mortgage. The mortgagee sold the land to the Plaintiff buyer that the Defendants had originally entered into an agreement of sale with, but for $687,000 instead of the original $500,000 sale price.

In this case, a woman was engaged in a lengthy divorce proceeding with her former husband. She believed that her husband was hiding assets from the court and was attempting to evade court orders.

In 2007, a motion judge had made a non-dissipation order with respect to the husband’s assets. The following year, in June, the wife’s lawyer became aware that the husband was attempting to obtain a bank line of credit for $500,000, secured against family property in dispute in the divorce proceedings. By the time the wife’s Lawyer could confirm the existence of the line of credit, it had been entirely depleted.

At the end of the divorce proceedings, the wife was left with very few assets, as the bulk of the family assets had been dissipated by the husband or taken up by legal and accounting fees.

The wife then sued her Lawyer for negligence, claiming that they should have either registered the non-dissipation order against the property, brought it to the attention of the bank, or obtained a new order prior to the husband securing a new line of credit secured against the family’s real property.

LAWPRO successfully assisted the Lawyer in defending the claim. The Court found that the non-dissipation order was not registrable since it did not apply to a specific property. Further, it would have been inappropriate for the Lawyer to contact the bank to interfere in the husband’s financial affairs without permission from the husband or the Court to do so. Finally, it would have been unlikely that the Lawyer could have obtained a new order, such as a Mareva injunction, based on the evidence available at the time.

As such, the Court found that the Lawyer did not breach the standard of care, and the claims in negligence were dismissed.

Securities and finance – No such thing as negligence in the abstract

In this case, the Plaintiffs were shareholders of a company for which the Defendant acted as counsel. The Plaintiffs lent approximately $3.7 million dollars to the company, without the involvement of the Defendant counsel. However, after the loans were completed, the Defendant was asked to prepare documents to secure the loans and “paper the transaction.”

When “papering the transaction,” the Defendant did not prepare a promissory note, which they had been instructed to do. The Defendant later admitted that they should have done so.

However, approximately two years later, the Plaintiffs concluded an agreement with the company to surrender their shares and acknowledge all of the outstanding debt. At that time, the Defendants received a promissory note for all outstanding amounts owing.

Nevertheless, the Plaintiffs later sued the Defendant for negligence, claiming that their failure to provide a promissory note when the transaction was originally “papered” reduced the Plaintiff’s bargaining power with the company going forward.

LAWPRO successfully assisted the Lawyer in defending the claim. Although the Lawyer admitted to making an error in failing to draft the promissory note in accordance with the instructions, the Court found that no damages flowed from this error. The Plaintiffs received all amounts owing on the debt, and it was not clear what “bargaining power” was lost when the Plaintiffs subsequently negotiated a share surrender.

The Court stressed that there was no such thing as negligence in the abstract, and there was no cause of action if no damages flowed from the mistake. The claim in negligence was therefore dismissed.