Defending lawyers in court in 2020 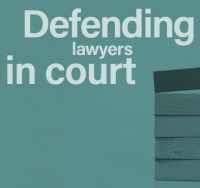 Despite any attempts to resolve claims without litigation, sometimes court is inevitable. Every year, LAWPRO steps in to defend licensees from unwarranted lawsuits and accusations.Here are a few examples of defences successfully advanced by LAWPRO in 2020 on behalf of insureds.

Partners in a legal firm can be held liable for the business debts incurred by other partners as part of the partnership. In some circumstances, it may be unclear whether lawyers are practising in partnership, or as sole practitioners in “association” with one another.

That was the situation in this case, where a solicitor Debtor had practised in association with a Litigation Firm for many years, sharing things like office space and holiday parties, and whose name was included in the name of the litigation firm. The Debtor, however, kept separate finances and files and was not included in the Litigation Firm’s partnership agreement. The Debtor incurred a substantial amount of business debt from multiple parties and eventually defaulted on it. The Creditors sought judgment against the Litigation Firm and its Partners as being liable for the amounts owing by the Debtor.

When alleging that counsel’s negligence led to a criminal conviction, the appropriate forum for litigating such a claim is an appeal of the conviction itself. Pursuing a separate claim of negligence after losing an appeal case is a collateral attack on the conviction and is impermissible.

In this case, Lawyers represented the Plaintiffs in defending a proceeding before the Ontario Securities Commission. The defence was unsuccessful, and the OSC found the Plaintiffs guilty of securities fraud.

The motion judge dismissed the Plaintiffs’ claims against the Lawyers, as the negligence allegations were res judicata. The Plaintiffs appealed.

Circumstances will sometimes arise where lawyers find themselves asked to represent multiple sides in a transaction; or, alternatively, representing one side before later representing another. These situations place the lawyer in a conflict of interest and should be avoided unless all parties agree to the situation and all ethical rules are complied with.

Unsuccessful clients can sometimes direct follow-up lawsuits to their former counsel, regardless of the merits of such claims.

The Plaintiffs then retained new counsel and sued the Defendant Lawyers, alleging professional negligence in the conduct of their unsuccessful litigation strategy.

The trial judge found in favour of the Defendant Lawyers and dismissed the claim. The Plaintiffs appealed.

Real estate law – No duty of care to opposing parties

This case arose in the context of a failed real estate transaction. The Plaintiff agreed to purchase a particular property from the Vendors. After signing the Agreement of Purchase and Sale, the Plaintiff assigned their rights in the Agreement to the Defendant Purchaser. The Vendors then failed to close the transaction and subsequently sold the property to alternate buyers. The Defendant Purchaser responded with an action against the Vendors for specific performance.

The Lawyer sought a dismissal of the Plaintiff ’s claims against them as disclosing no cause of action.

LAWPRO successfully assisted the Lawyer in having the claim against them dismissed. The court agreed that the Plaintiff was always adverse in interest to the Lawyer’s client, both before and after signing the Assignment Agreement. As well, the Plaintiff did not allege that it placed any reliance on the Lawyer.

Further, the only evidence of negligence advanced by the Plaintiff was that the Lawyer had made a false statement in pleadings filed in other proceedings against the Vendors. The court found that this could not be used against the Lawyer as the statement was subject to the doctrine of absolute immunity.

Therefore, the Lawyer had no duty of care to the Plaintiff, there was no evidence of negligence or misconduct, and the claim was dis-missed as disclosing no cause of action and an abuse of process.

A malpractice claim doesn’t necessarily mean a lawyer made a mistake, but a defence still needs to be raised. LAWPRO provides effective assistance and prides itself on defending licensees.