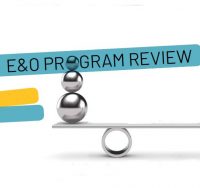 When it comes to long-term trends in the quantity and causes of malpractice claims, slow and steady are positive descriptors. While many things in the legal profession could stand to move at a faster pace, predictable changes to potential risks allow LAWPRO to adequately plan for future costs and outlays by balancing them against premiums, levies, and investment income. It’s good news, then, to report that there was little in the way of surprises in 2018 when it comes to the quantity and causes of claims. 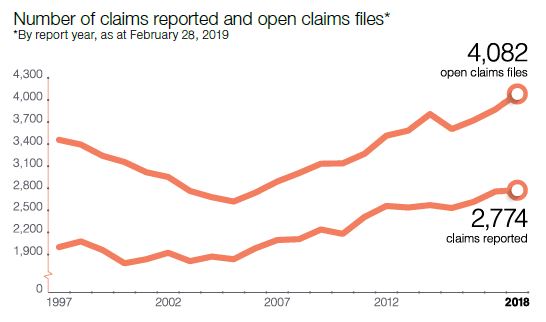 The rate and severity of claims

The number of claims per lawyer has remained relatively consistent since 2011: slightly more than 1 claim for every 10 lawyers. There were 2,774 claims reported in 2018—substantially equivalent to the 2,757 claims seen in 2017 over the same period. With more lawyers come more claims in the aggregate, but we believe efforts on the part of LAWPRO and the Ontario bar to prevent claims through continuing education and best practices have successfully contained the rate of claims on a per-insured basis.

While the rate of claims has remained relatively constant, the value of the claims we see has been gradually increasing. In the past seven years, the number of claims valued between $100,000 and $249,000 has been creeping up. However, our actuarial projections show a gradual pull-back of reserves in this dollar range, and we currently see no concern in terms of ultimate severity. 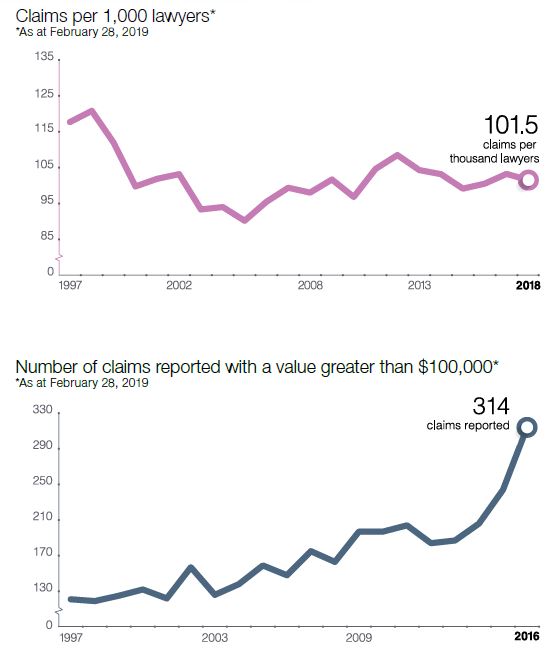 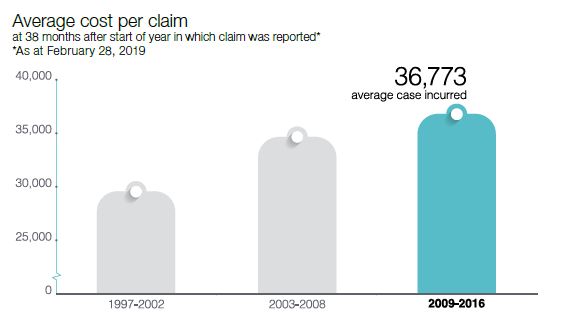 Those old familiar areas of loss

For more than 20 years now, litigation and real estate have been the areas of law that see the most claims. 2018 was no exception to this trend, with these areas accounting for more than half of the claims we see. Civil litigation, specifically, led to approximately 29 per cent of claims last year, with real estate practices the source of approximately 28 per cent.

Earlier in the decade, we began to see a trend toward more claims and increased costs arising out of civil litigation. This increase was largely due to an increased effort by the courts to administratively dismiss inactive matters using Rule 48 of the Rules of Civil Procedure. Discussions with the courts and other stakeholders were undertaken and the resultant changes to Rule 48 have reversed this trend. LAWPRO is making ongoing efforts to educate lawyers on the changes to Rule 48 and the steps they can take to reduce their exposure to administrative dismissals.

As a counterpoint to the relative stability in the number of claims arising out of civil litigation and real estate, we have measured real growth in the proportion of claims arising out of family law and wills and estates. Growth in these areas may be caused by Canada’s aging population, or dramatic changes in the value of real estate. Whatever the cause, these areas will continue to be closely monitored by LAWPRO in the future. 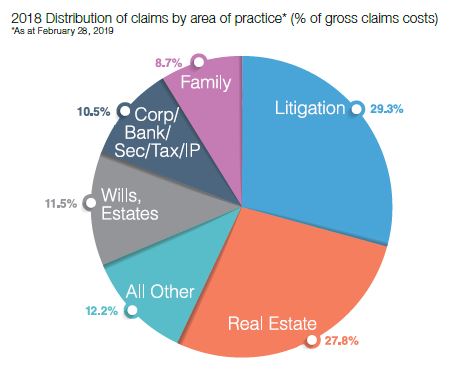 Causes of loss: What we have here is a failure to communicate

The investigation and assessment of claims can take up to a year or more after an initial report. Trends among the most common sources of claims can therefore be illusory over the short term. However, our data continues to show consistent long-term trends that Ontario lawyers should be aware of.

Time management-related errors have gradually decreased from a high of 570 in 2011 to 438 in 2018. Like the slight reduction in litigation-related claims, this appears to be related to the amendments to Rule 48 of the Rules of Civil Procedure. While at the same time, inadequate investigation has gradually climbed to become the second most common source of claims. LAWPRO will continue to take steps to prevent claims in these areas through the provision of practice management and claims prevention materials to licensees. 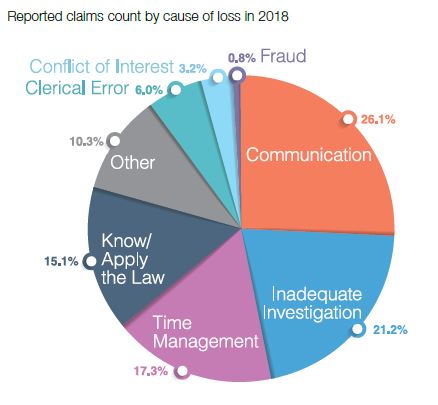 In 2018, LAWPRO once again successfully managed projected claims costs through claims management and cost containment efforts, together with investment income.

Beginning in 2016, LAWPRO began to see an abatement in what had been an upward trend in claims growth. This reduction in projected costs was an opportunity to reduce premiums paid by licensees in order to maintain an effective balance between revenue and costs. Accordingly, in the 2017 renewal year, LAWPRO introduced a $2,950 base premium, a $400 reduction from the 2016 premium. This lowered premium was maintained through the 2018 renewal year as well. As expected, despite the reduction in the base premium, LAWPRO has been able to meet its claims obligations on a roughly “break-even” basis. LAWPRO’s ongoing success in controlling growth in claims and other costs means that the $2,950 base premium was continued once again through the 2019 insurance renewal.

Last year, the civil litigation levy was raised to address the long term trend of increasing costs in this area. Despite recent stability in litigation-related claims, civil litigation continues to be the most expensive area of law for LAWPRO.

The current litigation levy aligns the cost of insurance with its associated risks and pursues a fair balance among Ontario lawyers in private practice. Although the rate of civil litigation and real estate claims remains high compared to the base premiums received from practitioners in these areas, the current transaction levies of $100 for civil litigation transactions and $65 for real estate transactions are adequately addressing this asymmetry. LAWPRO acts carefully on risk rating decisions, and our analysis will continue over the long term to continue to gain perspective and determine long-term implications.

New lawyers present lower claims risks than those with more experience. This may be partly due to new calls often having less responsibility over various files than their senior colleagues. LAWPRO responds to the reduced risk inherent in new calls by providing premium discounts to new lawyers with less than four years of practice. This discount ranges from 50 per cent of base premium (for lawyers with less than one full year in practice) to 20 per cent of base premium (for lawyers with between three and four years in practice). Years of experience as a licensed lawyer in practice in any jurisdiction is taken into account when considering eligibility for this discount.

Since new lawyers can be called throughout the year, LAWPRO clarified in 2018 that a “full year” of experience is deemed to be at least 200 days in practice. New lawyers who practise for less than 200 days in their first year will be eligible for a “first year” discount in both their first and second years of practice. 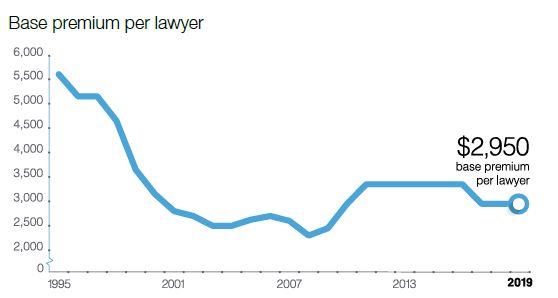