Defences: Standing up and stepping in for licensees 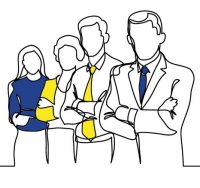 Sometimes a client’s accusations can’t be resolved without litigation. When a licensee has a viable defence to malpractice accusations, and the claim cannot be resolved out of court, LAWPRO steps in to provide lawyers with an effective legal defence.

LAWPRO’s claims management philosophy is aimed at quick resolutions in situations where there is liability, defend vigorously if the claim has no merit, and avoid economic settlements. In 2018, LAWPRO won six of the seven matters that the company took to trial and on which a decision was rendered, was successful on the one appeal the company argued, won 23 of 29 summary judgment applications, and won seven of 10 summary judgment appeal decisions.

Here are a few examples of defences successfully advanced by LAWPRO in 2018 on behalf of licensees.

Even when a lawyer provides excellent legal services, things don’t always go the client’s way. A client disappointed with results may seek to place the blame on ineffective counsel, even when the lawyer does everything in their power to advance their client’s cause. In such situations, LAWPRO defends the choices and actions taken by the licensee.

For example, in a recent child protection matter, two sisters were declared wards of the Crown after their parents were convicted of manslaughter in the death of the family’s third child. The parents then appealed the child-protection order, partially on the basis of allegedly ineffective assistance of counsel. Because the licensee was accused of negligence, LAWPRO stepped in to defend the licensee’s interests on the appeal.

The parents alleged on the appeal that their lawyer prevented them from testifying, despite their wishes to the contrary; did not call key witnesses; did not put forward a chosen cousin as a proposed alternate placement option; did not permit the parents to dispute certain facts respecting the circumstances of the death of their third child; and was incompetent due to inexperience in child protection law.

LAWPRO counsel successfully assisted the licensee in arguing that there were no acts or omissions on the part of the lawyer that amounted to incompetence, and the parents could not demonstrate any ineffective representation that impugned the fairness of the trial. The appeal judge rejected all of the allegations put forward by the parents, including the allegations of ineffective legal representation.

While LAWPRO makes efforts to assist licensees in repairing potential losses from missed limitation periods when there is an accusation of error on the part of the lawyer, it’s important to remember that limitation periods are intended to protect defendants from the unfairness inherent in delayed lawsuits. This protection extends to licensees facing stale malpractice suits.

LAWPRO assisted the defendants in successfully arguing that the claim was statute barred, as the defendants themselves informed the plaintiffs that they were unlikely to succeed on their appeal in 2010—more than two years before the plaintiffs commenced their action. The claim against the licensees was therefore dismissed.

Lawyers need to be careful about providing legal advice to multiple parties involved in a single matter. Conflicts of interest can arise if a lawyer appears to provide advice to parties that are not explicitly clients, or when multiple clients have conflicting interest. Advising non-clients to seek out and obtain independent legal advice is always good practice management.

However, unreasonable accusations sometimes arise from non-clients claiming to be impacted by a lawyer’s legal advice. One such situation arose in a recent case involving alleged fraud in the context of a private mortgage, where a claim of negligence was advanced by the lender against the borrower’s lawyers.

The transaction involved a second mortgage on real property in Ontario. The deal was brought to the lender by the lender’s lawyer—a separate individual from the borrower’s lawyers—who also represented the lender in the transaction.

When a client regrets agreeing to a proposed settlement or resolution to a dispute, second thoughts can sometimes lead to second lawsuits—against their former lawyer. One recent example involved an allegation that a licensee had pressured his former client into agreeing to an improvident settlement in a personal injury claim flowing from a motor vehicle accident.

There were notable elements of weakness within the plaintiff ’s original personal injury case. For one, multiple assessors, including a psychiatrist, two neurologists, two orthopedic specialists, and a kinesiologist, determined that the motor vehicle accident did not cause any of the plaintiff ’s alleged impairments. Additionally, the plaintiff had continued working after the accident, and only stopped working because of a conflict with her employer. This reduced the potential damages available.

At trial, LAWPRO assisted the licensee in providing an expert report that confirmed the licensee had provided competent legal advice and the settlement, in fact, exceeded the expectations of all parties involved. The claim was dismissed, and the licensee was vindicated.

Accusations of undue pressure on the part of the licensee can also arise in the criminal law context. In one such recent example, the plaintiff alleged that his lawyer coerced him to plead guilty to criminal charges brought in the U.S. The plaintiff also alleged that his Canadian lawyer (the licensee) provided negligent advice on U.S. law, failed to obtain complete discovery from the U.S. Government, and failed to consider concerns raised by one of the plaintiff ’s American attorneys with respect to the proposed guilty plea.

Following the dismissal of the charges, the plaintiff sued the licensee, alleging that his Canadian lawyer coerced him into pleading guilty and provided negligent legal assistance.

LAWPRO’s commitment to a strong defence has meant that 86 per cent of reported claims are closed without any indemnity paid. In our annual survey, 97 per cent of our insured were satisfied with the work done by our claims professionals, and almost nine in 10 felt that LAWPRO received good value for the dollars spent on their defence.

A malpractice claim doesn’t necessarily mean a lawyer made a mistake, but a defence may still need to be raised. LAWPRO is there to provide effective assistance and defend our licensees.