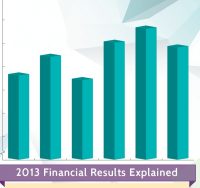 Net LAWPRO revenues in 2013 were $106.5 million. Premiums from the mandatory insurance program were $2.1 million higher than in 2012, largely due to a greater-than expected growth in the number of lawyers joining the mandatory program.

Net claims and adjustment expenses for 2013 decreased by $9.4 million compared to 2012. Part of that decrease was due to a net reduction in reserves of $11.4 million following the completion of a re-evaluation of the actuarial models used to estimate outstanding losses.

Investment income increased by $1.4 million to $16.3 million in 2013. Investment income from interest receipts decreased by $0.4 million to $15.8 million as a result of market volatility – also the cause of a $6.0 million decrease in net unrealized gains on the fixed income security portfolio that the company uses to match claims liabilities (compared to a decrease of $1.9 million in 2012). Net capital gains on disposition of assets during the year were higher than in 2012: $5.6 million compared to $1.4 million. Finally,

LAWPRO was required to report a write-down of $0.9 million in unrealized losses on equity securities that met the International Financial Reporting Standards (IFRS) definition of “significant or prolonged decline.”

In 2013, the markets rallied and LAWPRO benefited from an increase in net unrealized gains on its surplus investments in the amount of $12.2 million. The surplus portfolio provided an unrealized return of $16 million.

Securities were sold reflecting a gain of $4.5 million which was released into investment income. An additional adjustment to transfer $0.6 million to investment income was due to the impairment of certain equity securities. In addition to these investments, LAWPRO recognized a $0.5 million gain on the company defined benefit plan as a result of rising corporate bond yields.

As the MCT is currently formulated, LAWPRO’S score is 233 per cent – up from 223 per cent on December 31, 2012, and well within the company’s preferred range.

However, regulatory changes on the horizon are expected to place significant pressures on the company’s MCT results going forward.

Less favourable changes to the MCT calculation will become effective on January 1, 2015, forcing LAWPRO to reassess its financial

strategies in the intervening months to prepare for compliance