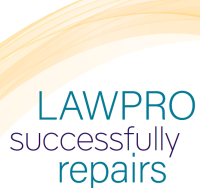 When LAWPRO is quickly alerted to potential claims, we are often able to rectify the problem and prevent loss and further lawsuits from arising. Our counsel know how to best address issues such as alleged failure to immediately disclose settlement agreements, disputes over jurisdiction to extend limitation periods, setting aside dismissal orders, and rectification of trusts. Here are a few examples of cases where LAWPRO successfully repaired potential losses in 2021.

The problem with Pierrengers: Settlement risks in multi-party litigation

Usually, it’s safe to assume that a defendant and plaintiff aren’t on the same side. However, in multi-party disputes, settling with only one defendant can alter the “landscape of the litigation” and impact this assumption. This can often happen with Pierrenger type agreements, where a defendant or defendants agree to assist the plaintiff with their claim against a co-defendant in exchange for a resolution of the claims against them. Suddenly, parties that were adverse in interest are now allies. Witnesses who were expected to testify against the plaintiff may now provide evidence that supports the plaintiff ’s position.

Keeping this change a secret from the remaining defendant(s) and the court can be seen as an abuse of process and have serious consequences, including a stay of the entire action.

In this repair matter handled by LAWPRO, the plaintiff came to an agreement with one group of defendants to settle their claim in exchange for certain cooperation. The agreement was disclosed to the court and remaining defendants 10 days after being finalized. At that time, the remaining defendants requested production of the settlement agreement. The plaintiff ’s counsel disclosed some terms of the agreement, but initially refused to provide the entirety of the settlement agreement for approximately three months.

The non-settling defendants then moved to stay the action, asserting that the delayed disclosure of the terms of the settlement agreement amounted to an abuse of process. This placed the plaintiff ’s counsel at risk of a malpractice claim if the entire claim was dismissed.

LAWPRO assisted the plaintiff in successfully arguing that the settlement agreement did not “change the litigation landscape” to the extent that immediate and full disclosure would have been necessary. The court found, in this case, the settling defendants had always been adverse in interest to the remaining defendants, with or without the settlement agreement. As such, the agreement did not change the litigation landscape “entirely,” and the strict disclosure obligations laid out in cases like Handley did not apply. The motion was dismissed and the plaintiff’s claim was allowed to continue.

The powers LAT be: A tribunal’s jurisdiction to extend limitation periods

The powers available to tribunals are limited to those expressly provided by statute. Unless a tribunal is expressly granted the discretion to extend limitation periods, the discretion doesn’t exist.

Conflicting decisions at the tribunal level had necessitated judicial clarification on this question. A denial of jurisdiction could have led to claims implications when additional matters before the LAT were tossed for reasons of missed limitation-periods. The statutory language at issue read “despite any limitation of time fixed by or under any Act . . .” the tribunal could “extend the time for giving the notice either before or after the expiration of the limitation of time so limited” if there were reasonable grounds for doing so. The question to be resolved was whether this language granted jurisdiction to extend limitation periods enumerated in a regulation (specifically the SABS), in addition to limitations expressly set out in legislative “Acts.”

LAWPRO successfully assisted the parties in arguing that the relevant language did, in fact, grant the LAT jurisdiction to extend limitation periods found within the SABS and other regulations. The Court agreed that regulations are drafted “under” an Act, and therefore the statutory language referring to limitations of time fixed “under any Act” included those limitation periods set out in regulations such as the SABS.

Delayed but not dismayed: Setting aside dismissal orders

Lawsuits are slow-moving beasts. They are rarely resolved expeditiously. But when progress slows so much as to seemingly cease entirely, the action may become at risk of being dismissed
for delay.

In this repair matter, the plaintiff ’s personal injury claim had been dismissed by the Registrar for delay not once, but twice. The claim involved damages sustained after falling from a ladder in 2012 and the Statement of Claim had originally been issued in mid-2013.

A first dismissal order for delay was granted by the Registrar in 2018. While it was quickly set aside, the Master who did so also implemented a litigation timetable dictating that all examinations for discovery be completed by the end of 2018, and the trial be scheduled for summer 2019.

In January 2020, the defendants sought and obtained an order to dismiss the action for delay.

LAWPRO assisted the plaintiff’s lawyer in having this second order for dismissal set aside. While the lawyer admitted that the failure to comply with the litigation timetable set by the Master was due to inadvertence on their part, and a failure to properly supervise their assistant, the Court agreed that this did not, on its own, justify a dismissal order, as the inadvertence was not the fault of the plaintiff themselves and was a reasonable explanation for the delay.

The Court found that the application to set aside the dismissal order was sought in a timely manner, and there would be no prejudice to the defendant in permitting the claim to proceed. The dismissal order was set aside, and counsel for the plaintiff avoided any possible claims implications flowing from any procedural errors on their part.

When plaintiffs are injured, it can sometimes be difficult to immediately determine who is to blame. The causative antecedents to an accident may not be determined until after a Statement of Claim is issued, additional examinations and discovery have occurred, or the entirety of the defendant’s evidence is understood. In these circumstances, a new potential defendant may come to the plaintiff ’s attention outside of the presumptive two-year limitation period.

In this repair matter, the plaintiff had been injured in a motor vehicle accident. In addition to the driver and owner of the second vehicle involved in the accident, the plaintiff initially sued the City, alleging that it owned or occupied the intersection and allowed the growth of vegetation that obstructed the view of motorists and contributed causally to the accident.

In its defence, the City issued a third-party claim against various developers it claimed were responsible for construction projects that created the obstructive vegetation issues as well as visibility problems caused by large signage erected by the developers.

The plaintiff then sought to add these Developer Defendants as additional defendants in the original claim, despite the fact that the presumptive two-year limitation period had now passed. The proposed Developer Defendants opposed this on the grounds that their alleged involvement was known or should have been discovered by the plaintiff more than two-years prior.

LAWPRO assisted the plaintiff in successfully arguing that the involvement of the Developer Defendants was unknown by the plaintiff prior to receiving the City’s defence. The evidence collected by plaintiff’s counsel prior to issuing the claim did not clearly establish the involvement of the Developer Defendants, and it was not possible to determine in the motion whether the plaintiff’s lawyer should have gone further than they did in investigating potential additional defendants, as doing so would involve issues of credibility or fact warranting a trial or summary judgment motion.

The motion to add the Developer Defendants was therefore allowed.

Small typographical errors when drafting contracts or trusts can have big consequences.

Unfortunately, the trust instrument was drafted to make the father the trustee holding the property for his son as beneficiary. This error was not discovered until after the son, tragically, predeceased his father.

The late son’s wife sought to have the property transferred to the son’s estate in accordance with the terms of the trust. The father resisted this transfer, claiming that the terms were reversed in error, and the intentions of the parties were that the property would revert wholly to the father should the son pre-decease him.

The father sought a court order rectifying the allegedly erroneously reversed names in the trust instrument.

LAWPRO assisted the father in successfully seeking trust rectification. The lawyer that drafted the trust instrument testified in support of the father’s position that the intentions of the parties were such that the father was to be the beneficiary of the property, not the son, and the instrument was not intended to allow the property to be transferred to the son’s estate in these circumstances.

The lawyer testified that the instrument as drafted did not make sense, as making the son the beneficiary would not have avoided the tax consequences that were the impetus for the trust in the first place. The court fully surveyed the evidence as to the parties’ intentions at the time of signing the trust instrument and concluded that it was, in fact, the father that was intended to be the beneficiary, and the trust was rectified to reflect this conclusion.

Immediately notifying LAWPRO of potential errors or omissions means steps can be taken to resolve the situation before it develops into a malpractice claim. If you make an error or believe you could be accused of making an error down the road, don’t try to resolve the problem on your own. A call to LAWPRO means we can provide expedient and experienced advice and assistance.