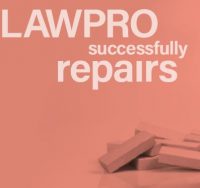 When LAWPRO is quickly alerted to potential claims, we are often able to rectify the problem and prevent loss and further lawsuits from arising. Our counsel know how to best address issues such as failure to comply with strict notice requirements, failure to discover unknown defendants within the limitation period, and the threat of dismissal on account of delay.

Here are a few examples of cases where LAWPRO successfully repaired potential losses in 2020.

1. The fast and the curious: Delayed discoverability of defendants

It’s hard to sue someone when you don’t know they exist. Unfortunately, the discoverability doctrine sometimes requires lawyers to not only dig a little deeper and ask whether there may be additional defendants in a given action, but do it fast before potential limitation periods expire.

The limitation period had not expired, and the claim against both Defendants was allowed to proceed.

2.The fairest claim of all: Mirror claims and unreasonable delay

Unreasonable delay or abandonment of a cause of action will generally lead to an order for dismissal. But dismissing a claim while allowing a mirror-like counterclaim to proceed can have unfair consequences.

The Plaintiff then commenced a proceeding for recovery of the deposit and additional damages. In response, the Defendant counterclaimed for damages and breach of contract. Then, no action was taken on either side for an extended period of time.

Four years later, the Plaintiff acquired new counsel. One year after that, the Defendant acquired new counsel and the Plaintiff filed a motion in the proceeding to prevent an administrative dismissal. At that time, a Master ordered that the case not be dismissed, a litigation timetable be set, and a trial be scheduled within approximately one year.

Again, no immediate action was taken by the Plaintiff. The following year, the Defendant sought to have the Plaintiff’s claim dismissed for delay or, in the alternative for summary judgment to be rendered.

LAWPRO successfully assisted the Plaintiff in appealing the dis-missal of the action. The appeal court agreed that, although the motion judge correctly applied the test, and their decision would normally be subject to deference, this particular context led to an unjust result. Since the Counterclaim dealt with the same facts and issues as the Claim, allowing one to continue and not the other did not save judicial time or resources and was not in the interests of justice. The matter was remitted to the Superior Court for determination.

Lawyers act as officers of the court and are obligated to present an accurate account of relevant law to the presiding judge. But does this mean a lawyer is obligated to provide continuing updates on new case law developments after a hearing ends?

That question arose in this case where the Lawyer acted for an Applicant seeking summary judgment in an estates dispute. After the motion was heard, but before judgment was rendered, new, on-point authority was rendered by the Court of Appeal that undermined the Lawyer’s position in the motion. The Lawyer did not bring this new authority to the court’s attention while judgment was under reserve.

The court found that the Lawyer’s failure to immediately bring new relevant authority to their attention while the judgment was under reserve breached the Lawyer’s duty to the court, and therefore awarded substantial indemnity costs against the Lawyer’s client. This led to the Client refusing to pay the Lawyer’s fees, for which the Lawyer sued.

Meanwhile, the underlying matter for which the costs judgment was awarded was settled by the parties, making an appeal of the summary judgment application moot. Nevertheless, the Lawyer sought leave to intervene in the matter and have an appeal heard despite its mootness. It was the Lawyer’s position that the costs award was wrongly decided and had an adverse impact on the Lawyer’s reputation as well as the standards expected of the rest of the profession.

LAWPRO supported the Lawyer in their intervention and application for leave to appeal, and arranged for an amicus curiae to argue against the Lawyer’s position in the absence of other interested parties.

The court found that this was an appropriate circumstance to depart from the doctrine of mootness and grant leave to appeal. The Lawyer had a meaningful interest in the outcome of the appeal, as their fee dispute with their client relied substantially on whether the Lawyer’s alleged error warranted the adverse costs award. The appeal was allowed.

Combining distinct statutory obligations into a single document, when not expressly authorized, can lead to avoidable frustrations and disputes. This happened to a Lawyer whose franchisee client encountered financial problems and defaulted on a bank loan made for the acquisition of the franchise.

The franchisor claimed that using the Third Party Notice to also satisfy the rescission notice requirements did not comply with the Act, and therefore notice was not provided within the time period allotted. As such, rescission could not be claimed under the Act.

The franchisee then brought their Lawyer into the proceedings in the Lawyer’s personal capacity as an additional third party potentially liable for negligence for failing to comply with the terms of the Act. With both the franchisor and franchisee claiming that the Third Party Notice did not meet the requirements under the Act. The motion judge found that a pleading could not constitute notice under the Act, and therefore the rescission claim could not proceed. The Lawyer appealed.

The appeal court found that, although the use of a Third Party Notice to satisfy the rescission notice requirements of the Arthur Wishart Act was irregular and not ideal, the express language of the Act only required the notice to be in writing and delivered within a certain period. The Third Party Notice satisfied these requirements. Therefore, the rescission claim could proceed and there was no potential claim for negligence against the Lawyer.

5. Overruling the rule in Medhurst: Notice requirements in condo disputes

Requiring strict adherence to statutory provisions can sometimes have unintended outcomes that undermine the purpose of those very provisions. When binding precedent leads to such perverse outcomes, it’s sometimes necessary to seek the overturning of that precedent.

In this case, a condominium Corporation issued a notice of claim against various Defendants allegedly responsible for defects in the construction of the condominium. The Condominium Act required that notice of such an action be provided to the corporation’s owners prior to commencing the action.

In this case, the condominium Corporation provided notice to the owners after the notice of action was issued but before filing the statement of claim. The Defendants, relying on the binding ONCA authority of Medhurst, argued that this failed to comply with the Act’s notice requirements and the action was therefore a nullity.

LAWPRO assisted the condominium Corporation in seeking a five-judge panel at the Court of Appeal and successfully argued that Medhurst should be overturned. The Court found that Supreme Court of Canada jurisprudence released subsequent to Medhurst attenuated the result of that case and, further, that the decision in Medhurst resulted in unjust consequences, as it allowed defendants to undermine the interests of the Corporation’s owners by relying on a provision that was intended to protect those owners.

Failure to comply with the notice requirements under the Act was found to not automatically render the action a nullity, and the appeal was dismissed.

Immediately notifying LAWPRO of potential errors or omissions means steps can be taken to resolve the situation before it develops into a malpractice claim. If you make an error, or believe you could be accused of making an error down the road, don’t try to resolve the problem on your own. A call to LAWPRO means we can provide expedient and experienced advice and assistance.