The slow erosion of old truths

Loyal readers of this magazine know that at this time of year we highlight the areas of law and the malpractice errors responsible for the largest share of claims. The highlight reel for 2017 does not forsake familiar leaders: litigation claims continue to lead the pack, and poor communication is still the easiest way to get sued by a client. But just outside the spotlight, claims pattern change is brewing in the form of gentle upward trends, both for areas of law and for causes of loss. These subtle trends have not escaped our attention, and you can expect to hear more about them in coming issues of this magazine.

The annual new claims count continues to grow. As of February 28, 2018, there were 2,757 claims reported in 2017. It’s important to keep in mind, however, that the number of lawyers in private practice has also grown. Claims frequency – the ratio between the number of practising lawyers and the number of claims – continues to hover close to the 100 claims per 1,000 insureds. In other words, while the overall cost of claims continues to be pushed upward, lawyers are not, on average, becoming more negligent.

The investigation of newly-reported claims takes time. It can take up to a year or more for the causes of newly reported claims to come into focus. The figure below reports cause of loss trends to the end of fund year 2017, based on the information that was available at February 28, 2018.

And they (mostly) still do: only 14 per cent (by count) of claims reported in 2017 were based on a failure to know or properly apply the law. However, 10 years ago, such errors accounted for 11 per cent of claims. The prevalence of this area as a cause of claims has grown in the interval – not enough to set off any alarm bells, but it still merits reflection. What’s going on? Are efforts to contain fees putting the squeeze on legal research? Are lawyers becoming too isolated? We don’t claim to know for certain, but we’re paying attention.

Though time management errors have settled down as lawyers have adjusted to the amendments to Rule 48, inadequate investigation errors continue to show an upward trend. Problems with lawyer-client communication remain the most important cause of claims, accounting for 27 per cent of claims in 2017.

Claims creeping up in traditionally “safer” areas of practice

Litigation is the area of practice responsible for the highest count and cost of claims in 2017, with real estate not far behind. LAWPRO continues to monitor claim developments in these areas. However, as is demonstrated in Figure 5 below, there has been a gradual but noticeable upward trend in other claims areas, including family law and wills. Growth in the cost of claims in these areas may reflect increases in the value of real estate, especially in urban centres, and growth in the number of wills and estates claims may be stimulated by an increase in the relative age of the overall population. As the “baby boomer” cohort begins to bequeath significant assets to the next generation, will drafting grows more complex: lawyers may be asked, for tax purposes, to create dual wills for individual testators, or to draft wills that reflect the needs of blended families, children from multiple unions, and other special situations. Sometimes, these efforts end in litigation. At LAWPRO, we are paying close attention to the growth in wills and family law claims so that we can develop appropriate risk management responses.

Our claims handling report card for 2017

In 2017, 96 per cent of insureds who completed a satisfaction survey reported that they were satisfied with our efforts in resolving the claims. LAWPRO defense counsel received high approval ratings, with 86 per cent of insureds stating that they were satisfied with our selection of counsel. The LAWPRO claims resolution process involves close collaboration between the insured, internal counsel and staff assigned to the file, and in some cases, external counsel.

Managing claims costs requires that LAWPRO counsel make strategic dispute resolution choices. While many claims are resolved through negotiation, mediation or arbitration, we go to trial where the circumstances warrant, typically in an effort to establish precedents that will protect lawyers in the long term. 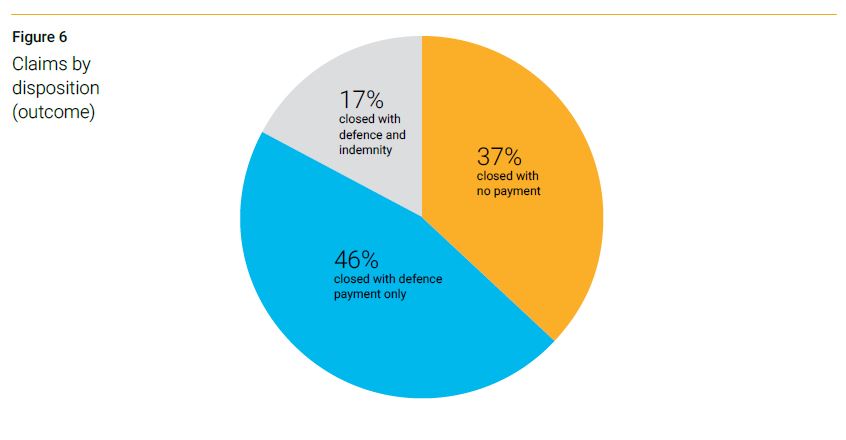