Large or small: Every recovery counts 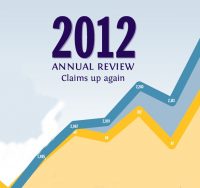 We may not be able to control the amount of claims we receive, but here at LAWPRO we do actively pursue recovery of costs owing to us from third parties throughout the year. Regardless of the amount recoverable, where the cost of recovery efforts warrant, we take action to enforce judgments, file writs, and take other steps to pursue reimbursement.
The amount recovered in 2012 was well over $1.7 million, and was made up of 197 separate receipts of amounts ranging from $40.00 to $740,000.

In a wills and estates claim, the claimant, a disappointed would-be beneficiary, alleged that the insured was negligent in preparing a will and did not obtain execution of the will before the testator uncle passed away. As a result, the estate went to the testator’s three sons. At trial the judge found that the insured met the relevant standard of care. There was no sign that the testator had any health issues or was in a rush to have the will executed.

The insured’s detailed notes supported this. The action was dismissed and the court awarded costs to LAWPRO. The period of time for payment passed, with no payments received from the claimant. Counsel registered writs of seizure and sale in Ontario where the claimant resides. In 2012, LAWPRO received a certified cheque in the amount of $30,000 in full payment of the award of costs.

The insured acted to complete a complex transaction for his client which included a corporate reorganization and refinancing. As part of the reorganization, there were transfers of the company’s real estate in a specific way to enable the claimant to avail itself of section 3(9) of the Ontario Land Transfer Tax Act. On this basis, the unregistered transfer of beneficial ownership of the properties was then reported to the Ontario Ministry of Revenue.

As the transferor and transferee were affiliated companies, it was the claimant’s intention to obtain a deferral and ultimately cancel the land transfer tax. However, a lease was entered into in connection with one of the properties. In a schedule to the assignment of lease document, there is reference to one of the transferees as the beneficial owner of the property. The Ministry took the position that the claimant was liable to remit land transfer tax of $715,562,50. LAWPRO paid the amount to stop interest and penalties from accruing, subject to a Notice of Objection submitted to the Ministry by the claimant. The insured handled this on behalf of the claimant as a self-repair, given its expertise in the area.

Ultimately, the insured was successful in proving to the Ministry of Finance that the land transfer tax was not properly payable. The Ministry reimbursed LAWPRO the full amount paid in respect of the tax.

Ten years in the making

This matter began in 2002 with the insured suing his client for unpaid fees. The client counterclaimed for several reasons, including on the allegation that the insured overbilled, and that he poorly represented the client in lawsuits and tax appeals.